Router, Wi-Fi Repeater, and Access Point - What Is The Difference?

We explain the differences between a router, an access point, and a repeater, and why you should not leave every job to the router in most homes. 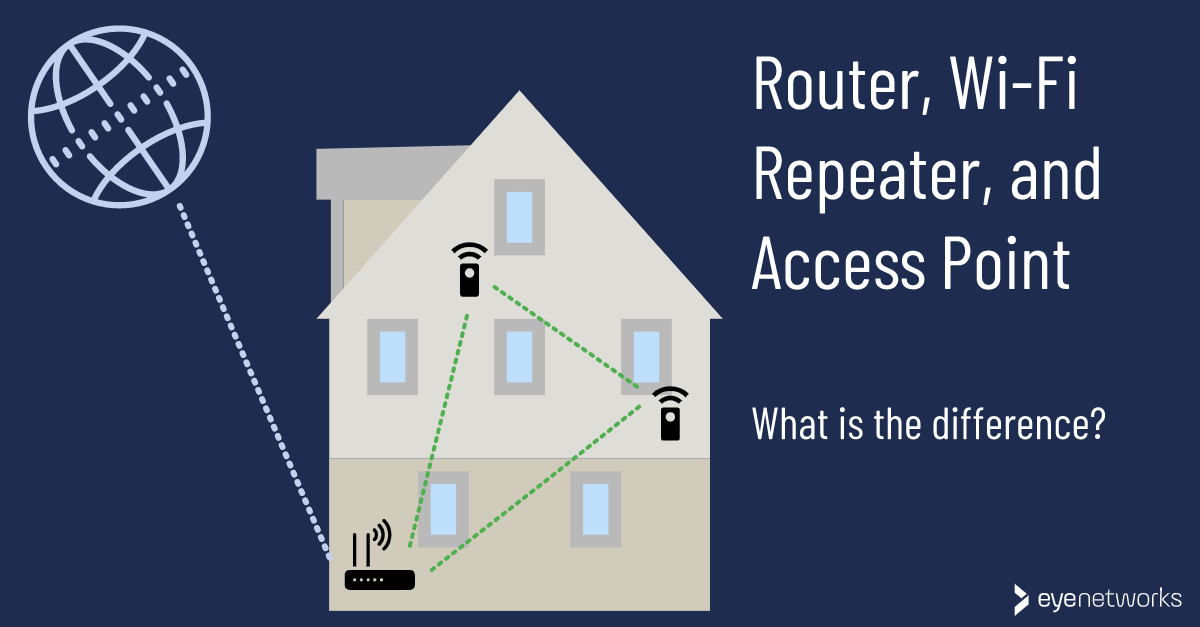 In order to have wireless internet in the home, three main jobs need to be taken care of:

While these are three separate functions, they are often performed by the same device, frequently referred to as a "home central", IAD (integrated access device) or similar by your ISP. It can also be split between two devices — one modem and one router with a built-in wireless access point, or each function may have its own dedicated device.

A wireless access point or hotspot consists of one or more wireless radios. All recent access points have at least two radios that transmit on separate frequency bands – 5 GHz and 2.4 GHz.

From these radios one or more Wi-Fi networks can be created. Each of these networks has an SSID or wireless network name.

In order to provide access to the internet, the access point must either be connected to a router or be a part of the router.

The three most common types of home access points are:

What is a Wireless Router?

The router's primary responsibility is to direct (route) data to the correct receiver. Almost all routers currently have wireless capability built in, but this does not actually have anything to do with the "router" part.

Traditionally, it has been assumed that a single wireless router, and therefore a single access point, would provide a good enough wireless network for most homes.

Gradually, it has become apparent that the task at hand is usually too large:

It is not doable for a single wireless router alone to penetrate the interference and obstacles in homes that have many rooms or concrete walls, floor heating, and so on.

Therefore, poor coverage is a widespread problem, and the use of Wi-Fi repeaters and mesh networks is increasing.

What is a Wi-Fi repeater?

A Wi-Fi repeater, extender, or booster is a device that forwards wireless signals from the router to cover a larger area, such as multiple floors of a house.

The repeater creates a new network based on signals from the originating network, and the clients that connect to the repeater are thus on a separate network. If you have more than one repeater, each repeater adds its own network.

A repeater does not have router or modem functionality, nor can it function as a standalone wireless access point; it relies on getting wireless signals from another access point that it can pass on (repeat).

Wi-Fi repeaters comes in many models and configurations – we strongly discourage the use of repeaters because the vast majority of them are cumbersome to use, and because they use capacity (airtime) from the wireless router.

In many cases, the Wi-Fi repeater can do more to boost the problems than the signals. But what should you do to get the whole home covered when the router isn't enough?

What Is a Mesh Network?

A mesh network is a wireless network made up of multiple access points that distribute wireless signals throughout the home and balance the traffic load between themselves.

The user connects with a single SSID and password and the mesh network determines which access point will provide the best coverage for which clients at any given time.

Most Wi-Fi solutions for professional and enterprise use are based on this type of technology, but it is also becoming more and more common for home usage.

A mesh network may consist of specialized wireless access points only, or the built-in access point of a router may act as a node in the mesh network -- this varies between solutions. You can read more about mesh Wi-Fi in Mesh Wi-Fi: What Is It And When Would You Need It?