While Internet speeds keep going up, customer satisfaction with providers has been going down. The white paper describes our quest to fix this experience. 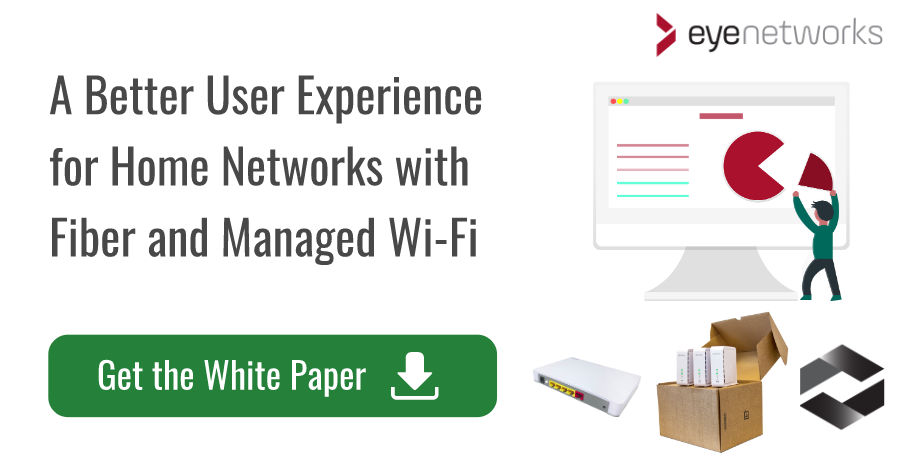 In Norway year before last, consumer satisfaction researchers saw something seemingly peculiar: Broadband customers actually rated their Wi-Fi quality lower than they did the year before.

OK, so network interference is on the increase, but was the overall quality really heading the wrong way?

What is happening is that consumer expectations are increasing, internet speeds are increasing and the typical home Wi-Fi solution of an all-in-one gateway delivered by ISPs is simply not–and will never be–able to keep up.

Customers are less happy because they now expect more.

Two major factors that we know drive network performance expectations for customers are:

The researchers also found that customers using streaming services had lower ISP satisfaction levels than others, and that only 1 in 5 Norwegian broadband customers would recommend their ISP to others. A staggering 25% thought they were not getting the speed they were paying for.

While the Norwegian market may have its peculiarities, these numbers are fairly closely mirrored in surveys from other countries.

The Incognito Broadband Consumer QoE Survey in 2016 found that 66% of US consumers were indifferent towards or unlikely to recommend their provider to others. Nearly 40% of respondents thought they were paying too much for the speed they received.

As frustrating as these numbers may look, they actually reflect opportunity for service providers.

A US and UK consumer study performed by wireless manufacturer AirTies showed that as much as 78% of the respondents would prefer getting wireless equipment from their internet service provider (ISP) rather than having to acquire it themselves.

Almost as many – 77% – said they would pay extra fees for this. 74% even said they would upgrade their broadband subscription if better Wi-Fi performance and speed could be guaranteed.

By all accounts, home users love fiber broadband, and they love Wi-Fi that works.

This white paper describes our quest to provide ISPs with solutions that give their customers the best of both worlds.

The Challenge: Fixing the Home Network

Eye Networks delivers networks solutions primarily to the Norwegian ISP market. Since 2012, we have been working on "fixing" the home user experience for wireless.

We knew this was the achilles heel of the standard ISP package–usually including some wireless functionality in the offering, but without being able or willing to make guarantees on the quality of service, nor taking any real responsibility for customer service for wireless.

The Norwegian market has several characteristics that make it an interesting and demanding market for wireless manufacturers:

Some Wi-Fi solutions advertise simple calculators where you input the size of your home and get a recommendation on number of wireless access points. This is clearly not well suited here.

A solution to fit this market needs to accommodate a high number of devices, cover a lot of space, work around a lot of hindrances, and be able to cut through the wireless noise created by all the devices and networks. The size of your home is only a small part of the equation.

Taking a modular approach to the home network has multiple upsides, as we will describe further below.

One crucial advantage is being allowed to find the best tool for every job, instead of rolling everything up into one device.

The solution is open to further modules as and when they become necessary or desirable.

The diagram below shows the current main components; the management and insight solution for ISPs, the fiber gateway, and the mesh Wi-Fi.

Let's start not with the ISP, but with the consumer, who (as we have seen) is increasingly vocal about unmet needs and wants.

Eye Networks has cooperated closely with the wireless specialists at AirTies since 2012, following the development and honing of their smart Wi-Fi products.

After a lot of testing and several pilot deployments, we identified a solution that works out of the box for the large majority of homes, and we call it "boligpakken"–the home pack.

All the user has to do is:

The access points will communicate wirelessly with each other, spread coverage throughout the home, and allow easy roaming, as the SSID and password are identical for all access points and frequency bands.

Our tests and experiments showed that three AirTies smart Wi-Fi access points made a sturdy mesh network that will bring full coverage and stable performance to most homes. Thus, the home pack came to be.

Why did we choose to go with three APs?

The home pack is now the preferred Wi-Fi solution of a large portion of Norwegian internet service providers and has been well received by the home users as well as the technology media houses that have tested it.

You can read more about one of the first larger deployments of the three AP solution in our AirTies Wi-Fi case study.

As described above, the AirTies Smart Wi-Fi network will take over all Wi-Fi responsibilities in the home.

In fact, any other wireless networks should be turned off to minimize interference and prevent devices from logging on to the wrong network by accident.

This means Wi-Fi functionality in any other customer-premises equipment is entirely redundant, but at least one access point needs a wired connection to a router or gateway in order for the entire network to access the internet.

Meet the perfect match for this scenario: CTS FRG-3105, a high quality fiber gateway with no wireless radios.

For the ISP to provide the home user with the desired service level, managed Wi-Fi is crucial, especially the ability to receive and act on QoS data.

EyeSaaS is a service platform for ISPs that combines:

With EyeSaaS Pearl, our management service, the ISP can both monitor and firmware upgrade access points, mesh networks, and CPEs, and interact directly with the customer's devices for support and troubleshooting when needed.

EyeSaaS Carat by Lifemote is an analytics service that provides unparallelled actionable insights into network quality.

EyeSaaS Pearl is developed and delivered by Eye Networks, based on software modules from leading ACS vendor Axiros.

The Benefits of Going Modular

When AirTies smart Wi-Fi takes care of all the Wi-Fi duties, there is no need for a CPE with Wi-Fi that will not or should not be used.

The modular approach means you only pay for the necessities, and don't double up on functionality.

Different technologies have different lifespans and change at different paces.

A major advantage of the modular home network is that it makes technologies with different lifespans less dependent on each other.

Wi-Fi technology changes much faster than other gateway capabilities; without it, you can provide the customer with a gateway that can last for 10-15 years.

Innovation: Ready for What Comes Next

The modular approach cuts cost and increases lifespans, but it also lays the ground for innovation.

The modular approach lays the ground for innovation.

Separating wireless services from the gateway opens up a range of service and product innovations:

Basing management on open standards also opens the solution up to more automation and innovation and prevents long-term vendor lock-in.

The bad news is that broadband customers are unhappy, but the good news is that we generally know what they want: Wi-Fi that works, throughout their homes, with satisfactory performance.

By providing customers with a fiber gateway built to last coupled with a managed mesh wireless network, ISPs can deliver on today's customers expectations, while standardizing on a modularized infrastructure that allows them to innovate and deliver tomorrow's services.

AirTies specializes exclusively in wireless technology and is known for perfectionism and solid quality assurance.

AirTies is headquartered in Istanbul, Turkey.

In the 20 years since it was founded, CTS has become a leading provider of fiber optic communication, offering high-quality solutions within Metro Ethernet, FTTX, and IP Triple Play.

CTS is headquartered in Taipei, Taiwan.

Eye Networks has been providing the Norwegian ISP market with network solutions and expertise since 2005. As a reseller of solid brands such as AirTies and CTS, we work closely with our vendors and customers to ensure that we find the very best solutions together.

EyeSaaS is a business unit of Eye Networks, and our first own brand. We have developed a service platform that works out of the box, targeted at service providers who want to spend their time focused on customer needs, rather than on building and tuning their own management platform.