What functionality can you expect from wireless access points with support for 802.11ac Wave 2 - and what does it take to benefit from the new technology? 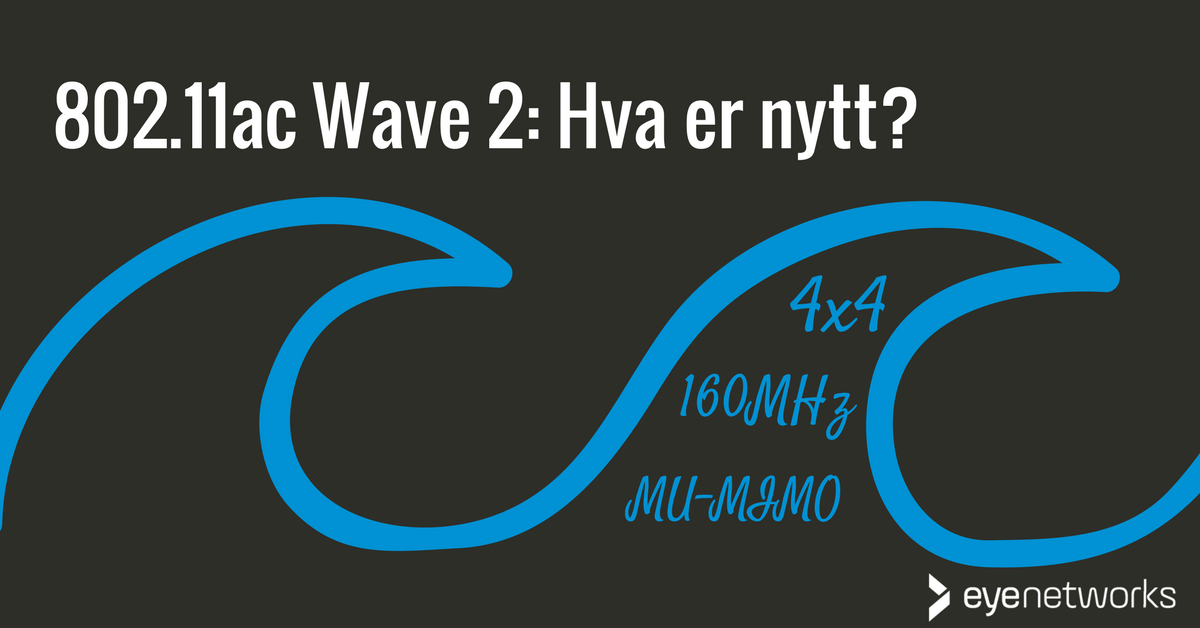 Why are wireless products so similar and what is it really that separates the vendors?

If you follow the market for wireless products, you will quickly notice that the functionality of many of them is very similar. This is mainly due to the fact that there are only three major providers of chipset used by the manufacturers: Broadcom, Qualcomm and Quantenna.

This means that all the manufacturers of wireless equipment mostly have the same functionality and also, largely, performance. What separates them is how clever they are in placing the antennas on their products, how expensive antennas they use, how well they protect other components from radio interference, and how they handle the radio signals before they are sent to the chip set.

The first 802.11ac products came on the market in 2012. At the time, 802.11ac was the latest wireless standard, but there was some functionality that was described in the standard that the chipset manufacturers were not able to include at that time, while everyone was competing to be first on the market. These products were therefore eventually called Wave 1.

Later, the standard has also been extended, and the Wave 2 products are meant to cover the gap in functionality between the standard and Wave 1.

If you have heard or read designations such as 1x1, 2x2, 3x3, 4x4 – this denotes how many antennas an access point has for sending and receiving signals – and how many spatial streams can thus be sent and received at the same time. 1x1 has one spatial stream, 2x2 has two.

But actual speed also depends on:

The access point is only one part of the communication! For example, most smartphones only support 1x1 (433 Mbps). For the speeds this phone can achieve, a switch of access point from AC1300 to AC1750 will not have any significance. When the access point supports more spatial streams than the client, it only sends as many streams as the client supports.

Some newer top models among smartphones support 2x2 spatial streams. Why not more? Simply put, because antennas take up space and draw a lot of power. In fact, most smartphones send far weaker signals than they are allowed to in order to prevent Wi-Fi from using too much power. Therefore, your phone will always have weaker signal than, for example, a laptop.

Newer notebooks can support 3x3, but at the time of writing, hardly any PCs or other clients support 4x4 (or higher).

The benefits from an access point that supports 4x4 will be most noticeable:

160 MHz points to how "wide" the wireless signal is in frequency — that is, how many channels we use. The more channels we use, the higher the speed. First generation 802.11ac access points supported 80 MHz. In other words, Wave 2 doubles this capacity.

In a perfect world without neighbors interfering (wireless interference, not general nosiness), you will get around twice the speed if your device also supports 160 MHz (in other words, you must have a client with an ac Wave 2 chipset).

Unfortunately, the world is not that perfect. Admittedly, the neighbour's 5 GHz network does not reach as far as the 2.4 GHz network, but if you can see the neighbor's network, you should not use 160 MHz. You should basically only use this if you do not have neighbors. If you use 160 MHz and you do have neighbors, your neighbor's network will ruin your performance and vice versa!

You will soon find that 160 MHz is slower than 80 MHz, because when you use 160 MHz, there are barely any free channels left. And even if your neighbor should be at 80 MHz and on a different channel, it is very likely that you are communicating on the same frequencies.

While there are five 80 MHz channels that do not affect each other, there are only two 160 MHz channels! And one channel is in an area used by radars.

The standard says that you cannot stay on a channel if the access point detects a radar in the area. Because the radars operate in the same frequency range as 802.11ac, they will interfere with each other, and everyone agrees that the radar is more important. Therefore, in many areas only one 160 MHz channel will be available, and then everyone will use it. And not only that, anyone using 80 MHz will also see their speed deteriorate, as they are disturbed by the 160 MHz networks – and the disturbance is mutual! So this becomes a perfect storm where things get worse for everyone, and nobody gets actual performance improvements.

For example, if your neighbor is running 160 MHz on channel 50, you will interfere with each other regardless of whether you use channel 42 or 58.

As mentioned earlier, one spatial stream goes up to 433 Mbps, but this is when one assumes a bandwidth of 80 MHz. If you double this to 160 MHz, you get just over double the speed, so one spatial stream is then 867 Mbps. With 3 spatial streams (3x3) we are at 2600 Mbps. However, note again that this requires both the access point and the client to support it, and that there are no neighbors or other interference in the area.

Wi-Fi is essentially a walkie-talkie technology. That is, only one party on the network may transmit at a time. When one client transmits data, everyone else must wait until it finishes. If multiple clients transmit simultaneously, the receiver will only hear noise. Therefore, a regular access point can only send data to one client/device at a time.

MIMO, also known as Single-User Multiple Input Multiple Output (SU-MIMO), is something we have had in wireless networks for a long time. 3x3, 4x4 and so on stands for the number of antennas sending and the number of antennas receiving. This means that each of the 3 antennas transmits different data (each their spatial stream), or receives three different radio streams. With MIMO, multiple streams are sent simultaneously to the same client (single user).

MU-MIMO stands for Multi-User-Multiple Input Multiple Output. MU-MIMO uses a special technique which allows one to send different data to multiple clients simultaneously (multi user). This can lead to more efficient use of airtime.

The prerequisites for MU-MIMO making a difference are:

Here comes yet another name that is a mouthful – QAM stands for quadrature amplitude modulation. This is about modulation of the radio signal itself, which allows one signal to transmit more data.

This improves speeds when:

Multiple Channels--Watch Out for Radar

With AC Wave 2 products, you get more 5 GHz channels to choose from. This means that it's easier to keep your neighbor's network from interfering with yours, and vice versa.

Unfortunately, the additional channels are all in the same frequency range as the radar. This will therefore only benefit those who live in areas where there is no radar. Some of these channels require the access point to scan for ten minutes before it can send traffic. Therefore, it is unlikely that manufacturers will provide this.

However, the biggest problem would once again be that older clients with 802.11ac do not support these channels. If the access point uses one of the new channels, the clients will not find the 5 GHz network and must instead connect at 2.4 GHz, which is significantly slower.

When you get clients that support these "new" channels, the advantage would be that they can have much higher transmission power and thereby increase coverage. It also means that some clients may get higher speeds in the same location as before, since they receive a stronger signal, but keep in mind that smartphones will still have a reduced transmit power, so if it failed to communicate with the access point before, it is probably not better now.

So what do Wi-Fi geeks have to look forward to?

The first noticeable effect of acquiring access points that support Wave 2 is that mesh networks with 4x4 access points will be faster.

All other functionality will depend on newer clients to make a difference, and even then primarily 4x4 spatial streams will see a consistently positive effect – unless you live without neighbors.